Of course, the signature crop at Jacobs’ Family Orchard is the apple. The huge Jacobs’ Family Apple sign identifies us and pays tribute to our signature crop. We’ve got everything from the classic Red Delicious apple to relative newcomers, such as the Enterprise apple and Zestar apple varieties which were first introduced to the world in the 1990’s. 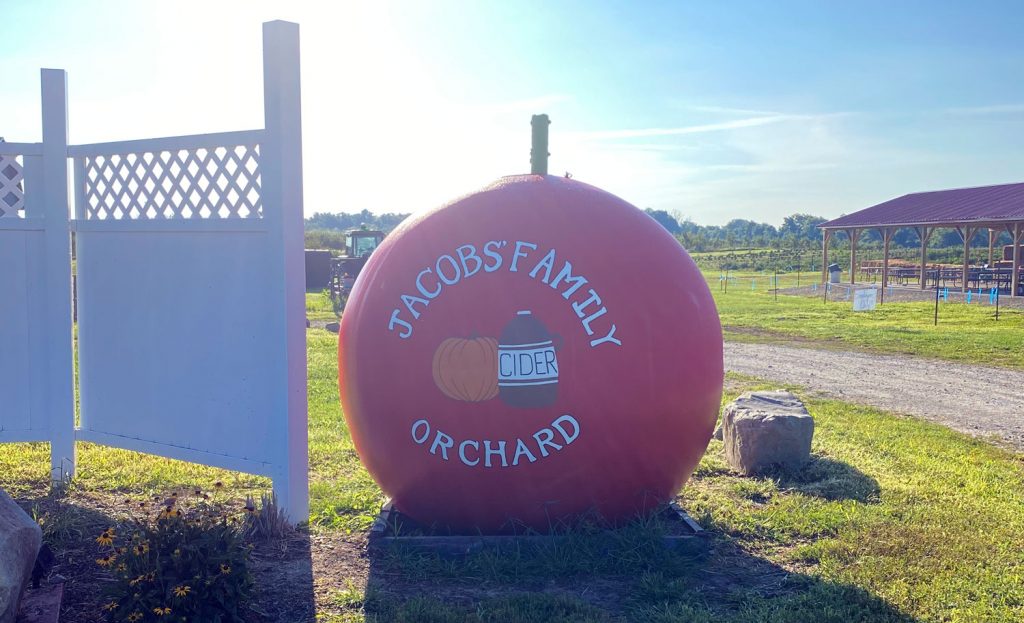 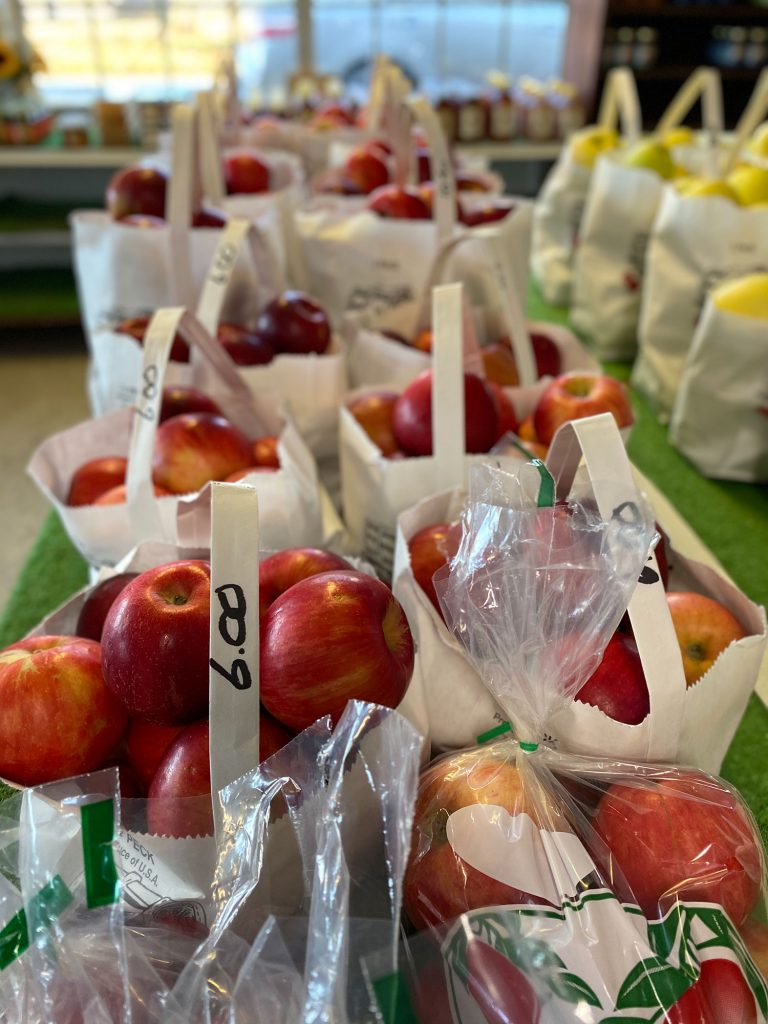 About our Apple Orchard

We are NOT a u-pick orchard!! What does that mean? We pick all the apples ourselves sort the good from the bad and put the good apples in bags on the tables for our customers to choose from. Since we are not a u-pick orchard there is constantly equipment moving through the orchard so we also do not allow anyone to walk through the apple trees. We do have a designated spot set up for picture opportunities in some of the trees closest to the building.

July 15th
Yellow in color, medium in size. This is the first apple we have available. It’s very tart and tender, which makes it ideal for pies. Production is variable. 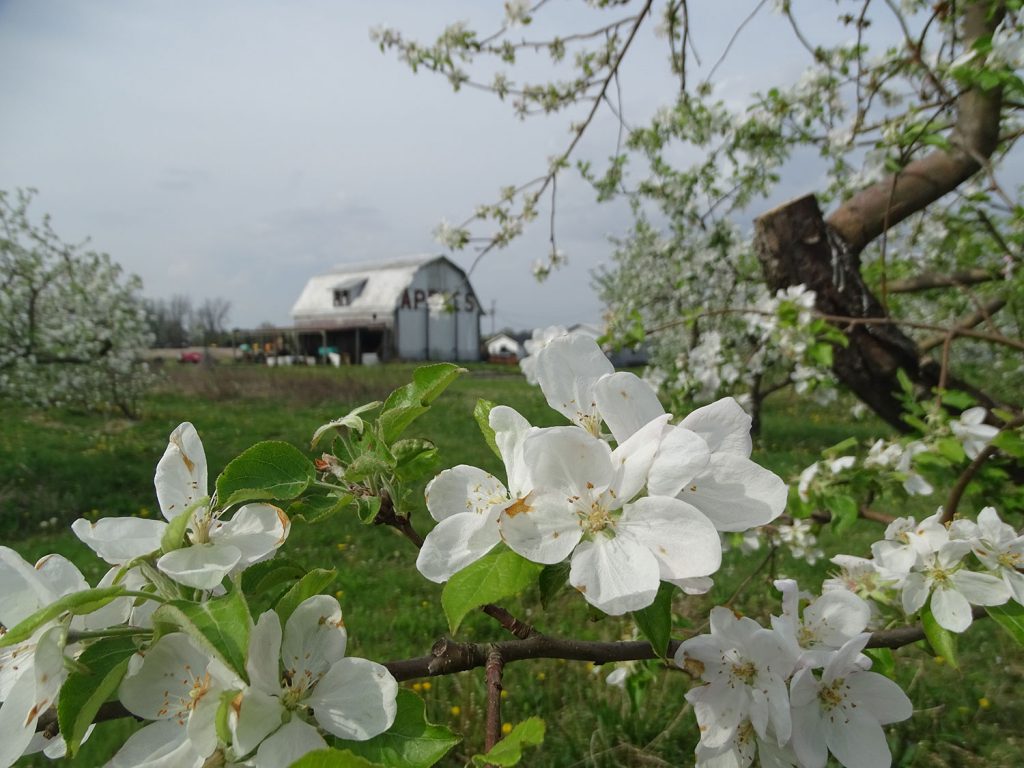 August 1st
A lemon-yellow colored apple that’s small in size. This crisp, juicy apple has a sweet-tart flavor with a hint of citrus. The Pristine is a good early eating apple.

August 15th
This medium-sized red apple with yellow undertones is crunchy and juicy, with an even level of acid and sugar. Some say it has a brown sugar aftertaste. It can be stored for one to two months at a time.

August 24th
An orange-striped over yellow apple. When it’s very ripe, it takes on a deep red color. This small to medium-sized apple has a mellow, sweet taste and is crunchy to the bite. The Gala apple is great for eating.

August 24th
A yellow apple with a red blush, it turns very red when mature. Conical in shape, this is a large, crisp, sweet and juicy apple. It needs to be handled carefully because it can bruise easily. The Molly Delicious is versatile, but has a short shelf life.

August 24th
A green apple with some red coloring. This large apple is crisp and juicy, with a tart flavor. Excellent for making apple sauce.

September 1st
A medium-sized red apple. This is a juicy apple with white flesh and a lightly tart flavor. One of the most aromatic apples, it’s great for cooking, but does break down when cooked. Keeps well.

September 10th
Has a light green-yellow background with a red-orange flush. Grows in both medium and large sizes. A crisp, sweet apple with a great bite. Has a low acid content. Baking with this apple may be difficult due to its large water content. It’s also a difficult apple to grow. Personally, we think the smaller Honey Crisps are tastier.

September 10th
This is a small to medium-sized apple with a bright red over yellow background. It stores well and its tart, crunchy taste makes it a good eating apple.

September 20th
A red apple with yellow undertones. The Cortland is medium to large in size. It’s a tender, sweet apple with a hint of tartness. Its white flesh is slow to brown. Great for baking and sauces, it does break down when cooked.

September 20th
This apple is red with slight yellow undertones. It’s small to medium in size. A juicy, crisp apple that has a spicy flavor. Its skin is tough, but it can go soft quickly. Has a short shelf life.

September 20th
A small, dark red apple. This juicy, crisp apple isn’t as tart as the Jonathan. This apple’s dark skin will give apple sauce a red tinge.

September 20th
A medium-sized apple that’s tall and conical in shape. As its name implies, it has a bright red coloring. A sweet, crisp apple with a tougher skin that keeps well.

September 25th
A reddish apple over yellow and green undertones that’s small to medium in size. A sweet, crisp apple with a tougher skin that keeps very well.

September 25th
A yellow to golden apple of medium to large size. A sweet, crunchy apple with a thin skin. It’s great for cooking or eating. It holds up well when cooked and keeps well also.

September 25th
A red apple with yellow undertones. A new apple variety that will be available by 2017. A sweet, crisp apple that keeps well, this is Indiana’s version of the Honeycrisp.

October 1st
A yellow apple over a red and cream flush of medium to large size. A tart, crisp apple.

October 10th
A large tangy-tart red apple with yellow undertones, that’s medium to large in size. An eating or cooking apple that holds its shape when cooked. It stores well and gets better the longer its kept.

October 10th
A medium to large-sized, mostly red apple. A tart, tangy and juicy apple with a firm texture. Great for cooking, it holds up and stores well.

October 10th
A large green apple, not known for its looks, but that tastes great. A sweet, light-flavored apple, it holds its shape when cooked.

October 15th
A red apple with yellow to dark red undertones. This is the largest apple we grow. A medium tart apple that’s great for cooking and stores well. A unique apple that’s found in only two or three more orchards in addition to ours.

October 15th
A pink apple with specks of green and yellow. The Fuji is medium in size. A sweet-tart, juicy apple that’s great for drying and keeps well.

October 20th
A green, medium to large-sized apple. The taste is extremely tart. It has a tough skin and is very firm. Great for pies, it holds its shape when cooked and stores very well.

October 20th
A red apple with yellow undertones. The Braeburn is medium to large in size. A thin-skinned apple with a tart and crisp flavor. Good for eating and baking. It stores well.

October 20th
A glossy red apple that’s small to medium in size. A tart, crisp apple with a tough skin, it’s great for eating or cooking. It also keeps well.

October 25th
A medium-sized yellow to golden apple. A rich, spicy, complex flavor with crunch. An excellent keeper that gets better with storage.